Confused about which cooking oil is best to use? You’re not alone!

If you just want the short answer, scroll down.  Else keep reading.

Manufacturers will claim all sorts of things, but when you get right down to it, all cooking oils may be categorized as polyunsaturated (PUFA), monounsaturated (MUFA), and saturated fatty acids (SFA). You can think of a fatty acid as a snake:

Saturated Fatty Acids (SFAs) are straight and fully saturated–meaning, each carbon atom in the backone is bonded with as many hydrogen atoms as possible. Saturated fats examples include animal fats, butter, coconut oil, etc. They tend to be solids at room temperature because there are no kinks, so they can stack flat on top of each other like bricks.1

Monounsaturated Fatty Acids (MUFAs) are like SFAs but have one double-bonded carbon pair, which produces a kink in the snake’s backbone and also means that one less hydrogen atom can bond with the snake’s backbone. That’s why they are called “unsaturated.” MUFAs tolerate light and heat worse than SFAs but better than PUFAs, and they tend to be liquids at room temperature because those kinks prevent them from stacking on top of each other as neatly as SFAs. You can find MUFAs in olive and avocado oil, cashews, and meats and milks.

Polyunsaturated Fatty Acids (PUFAs) have more than one double bonded carbon pair, and thus more than one kink. PUFAs tend to turn spoil (i.e., break down and turn rancid) easily when exposed to light and heat.

Trans Fats should be avoided, and you will rarely find them sold as cooking oil directly to consumers anyway. The difference between trans fats and natural PUFA/MUFA is that the hydrocarbon chain in trans fat molecules is reversed, resulting in a straighter molecule without the strong “kink” you normally find in PUFA/MUFAs.

Trans fats are unavoidable in nature; you will find a small amount of trans fats in various oils, meats, etc. But more often they are the result of industrial processing (partial hydrogenation) and used to make margarine and processed snack foods. Trans fats are also cheap and have long shelf lives, so they are popular with food companies. Sounds good so far, right?

The problem is that trans fats harden arteries, which leads to heart disease. Some small amount of trans fats are unavoidable, but the real problem is all the industrially-produced trans fats floating around in our food supply. The problem got so bad that the incredibly slothful U.S. Food and Drug Administration (FDA) removed partially hydrogenated oils from its list of Generally Recognized as Safe chemicals in 2013 and is phasing in a complete ban starting in 2015. (However, food companies can petition for exemptions, and we’ll see if the FDA can meet its goal of eliminating industrially-produced trans fats by 2018.)

The bottom line is that while some trans fats are unavoidable, you should try to eating anything with industrially-produced trans fats. You can tell if a product has trans fats by reading its nutrition label. A product with trans fats will have “partially hydrogenated vegetable oil” as an ingredient or else list a number greater than zero next to “trans fats.”

So which cooking oil is best to use?

Avoid PUFAs. They are safe at room temperature, so feel free to keep drizzling flaxseed oil oil over your salads. But PUFAs break down really easily at high temperatures, and at about 350F they start to oxidize and form aldehydes and lipid peroxides, which can increase heart disease and cancer rates if inhaled or consumed even in small amounts (as shown in a recent study at Leicester School of Pharmacy at De Montfort University (UK)).2 This is regardless of whether the PUFA has been refined to have a higher smoke point; those toxins are forming before you can see or smell them. So avoid cooking with PUFAs above 350F.

Obviously we don’t want to cook with trans fats, either.

So that leaves SFAs and MUFAs.

There is a lot of debate over how unhealthy SFAs are. For instance, the Mayo Clinic hates on SFAs because of studies of varying quality that imply that SFAs cause heart disease; that’s the conventional wisdom (don’t eat red meat, avoid cholesterol and saturated fats, etc.). But there are other studies that have found that saturated fats do not cause heart disease. There are dozens of studies that conflict, which means that both camps (die-hard vegans and die-hard meat eaters/low-carb fans) have plenty of “evidence” to support their respective positions. Here’s the bottom line:

I’ve taken raw data from the U.S. Department of Agriculture about cooking oils and complied it into the following table and chart to help you decide what oil is right for you. Ideally, you want a combination of high smoke point and low PUFA (polyunsaturated fat) percentage: 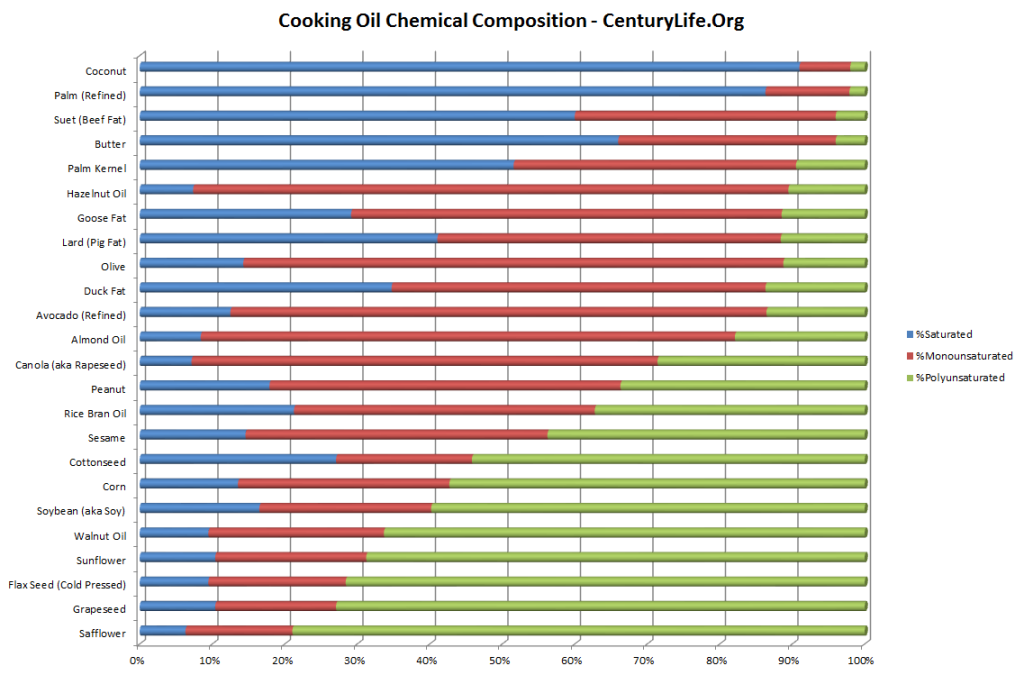 Be careful which brands of cooking oil you buy. There’s a lot of food fraud out there, including olive oil that has been diluted with other oil or doesn’t meet spec in some other way.

If you live near a grocer that turns over its cooking oil inventory quickly, buy it there. But be careful–many stores don’t move inventory that quickly, especially for higher-end oils, and I’ve even found expired olive oil in stores before. When buying online, I recommend sticking to bestsellers like the ones above, as they have higher inventory turnover so you are likely to get fresher oil.