You are here: Home / How-To Guides / Choose a Cooktop / Is Induction More Efficient Than Electric Coil or Gas? An Energy Efficiency Comparison Between Stoves

DEBUNKING THE MYTH THAT INDUCTION IS MORE EFFICIENT THAN ELECTRIC COIL

The U.S. Department of Energy (DOE) has estimated electric coil efficiency as about 74-77% and induction at 84%.1 Utility studies have shown similar results of about 80-81% efficiency for induction.2 (As an aside, natural gas stoves are less efficient than electric stoves at the point of use. When you use a gas stove with cookware, about 60% of the flame’s energy is wasted as heat that raises the temperature of your kitchen air if it isn’t vented; however if you consider the entire system from power plant to stove, gas is not necessarily less efficient than electric coil or induction.)3

However, there have been new testing protocols considered by the DOE that find that induction stoves are no more efficient than electric coil stoves.4 Another recent study conducted by an industry research institute found that coil can be more energy-efficient than induction when boiling water in pots that fully cover the diameter of the coil.5

For my own test, I boil water on two portable burners (one electric coil, the other induction), at the same wattage, and time which pot boiled faster. I measure power usage via energy monitors. Being a little over sea level, I decided that I define “boiling” as reaching 211 degrees Fahrenheit (99.44 degrees Celsius).

I poured 2.545 kg (about 2.7 quarts) of water into each pot, splashing water back and forth between the two until they each weighed 3,685 grams (8.124 pounds), uncovered. (Each pot weighed 1140 grams empty.) I let them sit, covered for about 18 hours to make sure they were the same temperature as the room temperature at the start of my test (78 degrees Fahrenheit). Both pots still weighed 3,685 grams uncovered the next day (my weigh scale rounds to the nearest 5 grams). The bottom disc diameter of each pot exceeded the coil diameter by about an inch. I carefully centered each pot over the center of each burner.

The IMUSA coil burner was rated for 1100 watts, but the coil burner on “high” drew only about 1000 watts. Unlike cheaper coil burners, the IMUSA takes a long time before its thermal protection kicks in to cycle on and off; it maintained a fairly steady wattage throughout the test (averaging 991W). To mimic the IMUSA’s power draw, I set the Vollrath to 50 percent power, which drew about the same wattage (averaging 984W). Both were plugged into identical Kill-A-Watt energy monitors, which plugged into identical heavy-duty extension cords drawing from 120-volt (15 amp) circuits.

Throughout the test, I took temperature readings at the center of the water within each pot. There is some bumpiness in the data, which I attribute to fluctuations as the convection currents got going and rounding error (I rounded to the nearest degree Fahrenheit). Both pots boiled uncovered in parallel (right next to each other, simultaneously), eliminating any temperature or humidity differences that could result if I compared their boiling times sequentially. 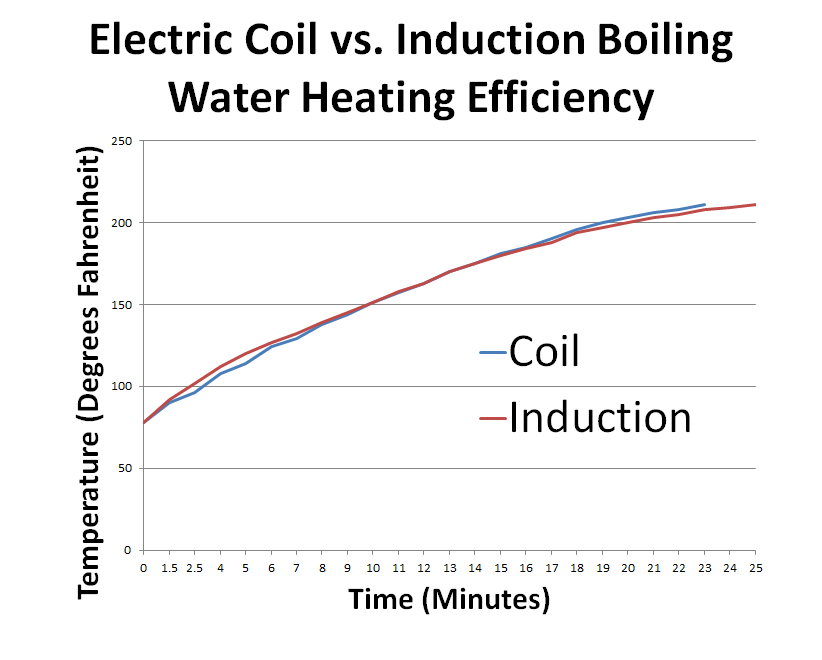 I used portable, 120-volt units of each type, and not full-blown 220+ volt cooktops and ranges, but my results were consistent with those of EPRI, DOE, and PG&E/Fisher-Nickel.6

These test results seem to indicate that in the short run, induction is more efficient than electric coil. However, in long run, electric coil is at least as efficient as induction.

In order to more clearly show the impact of having to heat a coil along with the pot of water, I ran the test again. This time, I used 0.455 kg (about 2 cups) of water, down from 2.545 kg (about 2.7 quarts). The room temperature at the time was 74F and I fine-tuned the induction stove to use the same average wattage of the coil. The results are below: 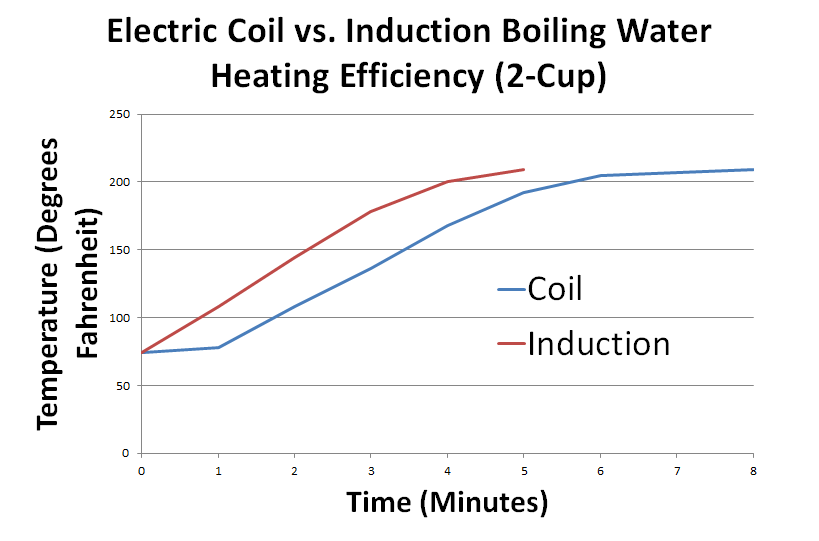 The induction pot boiled in five minutes. The electric coil pot boiled after 8 minutes and was much slower to get hot. In fact the coil pot gained only 4 degrees Fahrenheit after a full minute of heating, because so much energy was going towards heating the coil and the pot instead of the water.8

The coil’s sluggish response works both ways: even after I turned off the electric coil burner, the coil pot continued to boil for several seconds. This sluggish response (upward and downward) makes electric coil more annoying to use than gas and induction; with those types of stoves, turning the burner up or down results in nearly instant response in the pot.

Real-life coil efficiency may be slightly lower than tested. In my tests, the pot-to-coil contact was especially good because I was using a relatively new, flat pot with a brand new, flat coil. It’s possible that scratches or accumulated residue would result in worse pot-to-coil contact and therefore worse efficiency. Furthermore if the coil is bigger than the pot bottom’s diameter, that would also decrease efficiency. Therefore my results represent a close to best-case scenario for coil. (An induction pot would have similar issues with regard to pot flatness, but scratches wouldn’t matter, and you can count on the glass to be flat and free of residue, since that surface is easy to clean.)  Editor’s Note September 2016: I have since tested the same pot after it accumulated several more scratches, and it was not slower to boil.

Induction doesn’t have to heat a coil in addition to the pot and food, so induction is faster and more efficient than coil for quick cooking tasks. However, coil is slightly more efficient than induction for long cooking tasks, like boiling large amounts of water. In those cases, coil has enough time to catch up and pass induction, despite coil’s slow start. Most people cook using a mixture of short and long cooking tasks, so you can think of coil and induction as having equal efficiency for most people.

That said, efficiency isn’t everything. Induction still means quicker response, faster heating for short tasks, more accurate temperature target and timer controls, easier cleanup, and better safety since the glass doesn’t heat up as much as the coil.

On the other hand, coil is usually much cheaper and works with all type of cookware (not just those with magnetic bottoms).

Whatever you do, avoid electric radiant stoves (electric resistance coils underneath glass). Those electric stoves give you the worst of both worlds: they are more expensive than coil, heat up more slowly and less efficiently than either coil or induction, and the glass reaches higher temperatures than glass does with induction–which means food can burn on more easily and result in difficult cleanup.