If you’ve ever heated water for sous vide, you may have wondered if it makes a difference what kind of pot you use. 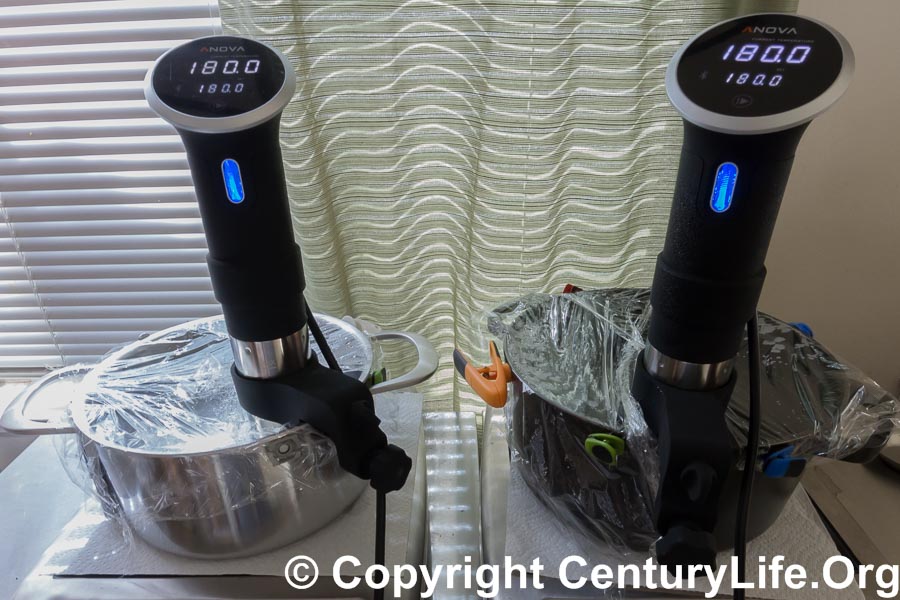 In this experiment, I took a Zwilling J.A. Henckels Sensation 5.5-qt. Round Dutch Oven aka Casserole

(stainless-aluminum-stainless clad; reviewed here) pot and a 6.25-quart Staub enameled cast iron pot and placed them on top of identical induction cookers that were turned off. I covered both pots with plastic wrap held in place by magnets, to reduce evaporation. From an initial temperature of 76F, I set both Anova immersion circulators to target 180F:

On the other hand, we know from heat retention tests of cladded vs disc-base designs that cast iron hangs onto heat (very) slightly better than clad, perhaps because enameled cast iron is a worse conductor of heat. So for long sous vide cooking times, cast iron may be more energy-efficient even if it takes a little longer to get up to target temperature.

Don’t worry too much about what kind of pot to use for sous vide. Most of the heat is in the water itself, so the time it takes water to reach temperature will be about the same no matter what the pot is made out of. If you’re curious about the efficiency pecking order, disc-base pots are most efficient, followed by cladded and cast iron, in some order. So unless you sous vide a lot, don’t bother getting a new stockpot just for sous vide.